A paperback of the combined HERA 2781 and HESTIA 2781 is planned for the future. Date to be confirmed. 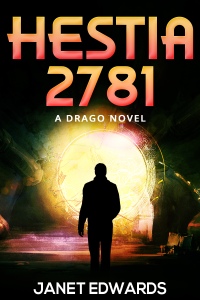 Set in the Portal Future

Hestia 2781 is a full-length novel and the second part of a three part sequence featuring Drago Tell Dramis as a newly qualified fighter pilot.

The year is 2781. Lieutenant Drago Tell Dramis’s first mission as a newly qualified fighter pilot ended with him and his team leader saving one of humanity’s oldest colony worlds, Hera, from destruction. Now he’s discovering that saving a world can be simple compared to living with the consequences.

Both Drago and his team leader and second cousin, Jaxon, are famous now, given rapid field promotions, and are due to be awarded medals. Worryingly, Drago learns Jaxon has a mysterious secret and a past history of erratic behaviour. It’s vital that Drago keeps both of them out of trouble and away from nosy reporters until the medal ceremony, because Jaxon could do or say something that deeply embarrasses both the Military and their Betan clan.

The Military is helping by sending their fighter team on a mission somewhere inconspicuously boring until the medal ceremony. That destination definitely won’t be Hestia, the perpetual trouble spot of humanity.

Books In Brogan “If you liked the Earth Girl series then you must read this book. It will give you not just more of Drago’s background but you also get a lot of great details to add to Jarra’s background.” See review