Available Worldwide in Ebook and Paperback

FRONTIER is a novella featuring Amalie. 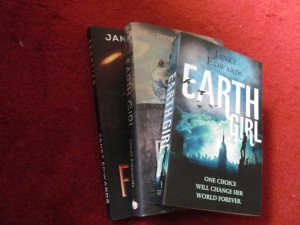 Life on a frontier farming planet in the twenty-eighth century has a few complications. The imported Earth animals and plants don’t always interact well with the local ecology, and there’s a shortage of doctors and teachers. The biggest problem though is the fact there are always more male than female colonists arriving from other worlds. Single men outnumber single women by ten to one, and girls are expected to marry at seventeen.

Amalie turned seventeen six months ago, and she’s had nineteen perfectly respectable offers of marriage. Everyone is pressuring her to choose a husband, or possibly two of them. When Amalie’s given an unexpected chance of a totally different future, she’s tempted to take it, but then she gets her twentieth offer of marriage and it’s one she can’t possibly refuse.

Note that most of the first two chapters of FRONTIER have appeared as the story Epsilon Sector 2788 in the EARTH 2788 short story collection. The other eighteen chapters are entirely new.