There is some good news and some bad news on the next release in the Hive Mind series. 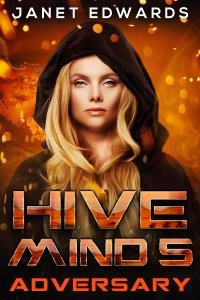 All outstanding paperbacks will be released as soon as the situation allows.

If you want to make sure that you don’t miss the release of Adversary, please sign up here to get email alerts whenever there’s a new release by Janet Edwards.

I can now announce the title and cover. Book 5 in the Hive Mind series is Adversary. The first draft is nowhere near complete, so I daren’t give a book description at this point, but the following cover description should give a strong hint about some of the book content.

The global pandemic has affected everyone’s plans for 2020. My apologies that illness and bereavement have left me way behind schedule all year, so the release has to slip into early 2021.

One of the reasons that the release of Adversary is slipping into early 2021 is simply that it’s turning out to be another long book. I know that some of you will regard that as good news.

Rather than leave people without anything new to read for Christmas, I’m looking at the possibility of releasing a short piece set in the Portal Future. It would be nice to get the follow-up story to Hera 2781 out into the world at Christmas, because that story is a sequel to Hera 2781, but also provides the background history for a story already written for the planned second Earth Girl Aftermath Collection.