Ebook Release of Earth and Air: An Earth Girl Novella

Earth and Air: An Earth Girl Novella is available now worldwide in Ebook

Set in the Portal Future of the Earth Girl trilogy 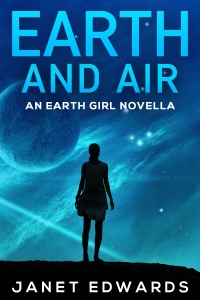 2788. Only the handicapped live on Earth. While everyone else uses interstellar portals to travel between hundreds of colony worlds, 17-year-old Jarra is among the one in a thousand people born with an immune system that cannot survive on other planets. Sent to Earth at birth to save her life, abandoned by her parents to be raised a ward of Hospital Earth, she lives a regimented life in one of their impersonal residences.

Jarra is spending the summer at New York Fringe Dig Site with her school history club. While her friends search for lost treasures on the ground, Jarra is airborne in a survey plane and hoping to become a qualified pilot, but the sprawling ancient ruins of New York contain the lethal legacies of the past as well as its treasures.

EARTH AND FIRE was the first of what is planned to be a sequence of three prequel novellas set in the distant future of the Earth Girl trilogy and featuring Jarra. EARTH AND AIR is the second in the sequence. At over 60,000 words it is actually longer than standard novella length.