Happy 2018 and apologies for a delayed New Year story

I have a tradition that I put up a new story on my website at the New Year. Sadly, I’ve been fighting a nasty virus for the last two weeks, and I feel like a wet lettuce that has been stamped on. My apologies that this has slowed my progress on my planned New Year story to a snail’s pace.

My revised goal is to get the story on the website next weekend, or at least the first part of the story. The plot has grown rather longer and more complicated than originally planned, so this story may turn into a multi-part affair.

Those who have signed up to get email alerts when I have a new release should get the usual email notification when the short story is on my website. That email will also include some advance news about which new books are likely to appear in 2018.

Other than the delay on the short story, 2017 was a good year for my writing. Scavenger Alliance was published in April as an ebook, with the paperback following in June. This book is set in the same portal future as Earth Girl, but several centuries earlier, and features one of Jarra’s ancestors struggling to survive in an abandoned New York. 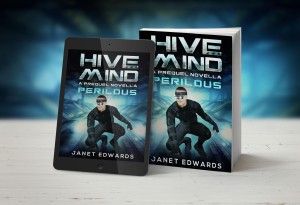 Perilous was published in September, with the paperback following at the beginning of November. This book is a prequel novella in my Hive Mind series. All my novellas and short stories are intended as optional extras for those who’d like some extra background to the characters and worlds in the full-length books. Perilous is set a year before the first book in the Hive Mind series, Telepath, and features several characters who will appear in Telepath, Defender, and later books.

I’d been hoping to publish the ebook of Defender before Christmas but I knew the timings would be very tight. As it turned out, I managed to publish it just before the cold virus hit me. Defender is the second full-length book in the Hive Mind series. Amber and her team faced a lot of challenges in Telepath, and their lives don’t get any easier in Defender. I hope to release the paperback edition in February.

The Hive Mind series seems to be proving very popular, and people have already been asking if this is to be a trilogy or there’ll be more books than that. The answer is that the Hive Mind series is planned to be open ended, and I have ideas noted down for several more books. Although some character story lines will naturally progress, each book is intended to be semi-independent, centred on a new case and exploring a different aspect of the Hive future.

My thanks to all of you for reading my books. The encouraging messages, reviews and ratings are deeply appreciated, especially those for Defender since the second and subsequent books in series always suffer from getting fewer reviews.

This entry was posted in News and tagged Future plans, News, Short stories. Bookmark the permalink.