Coming Next in the Hive Mind series

Some news for those of you asking about more books in the Hive Mind series.

The next book will be a prequel novella (half as long as one of my full length books) set a year before the start of Telepath, and covering some events when Amber is living on Teen Level. PERILOUS is planned as a September release.

But I know that some of you are mainly interested in the full length books, so will want to know what’s happening about Hive Mind 2. The answer is that Hive Mind 2 – DEFENDER is planned to release in December 2017/January 2018. I’ll obviously be trying my very best to get it out in time for Christmas.

I always find it hard to come up with adequate short descriptions of my books, but I’ve bravely suffered the double agony of composing them for both PERILOUS and DEFENDER, so keep reading for more details!

Amber is one of over a million seventeen-year-olds in one of the great hive cities of twenty-sixth century Earth. She’s worried that she only has a year left before she enters the Lottery of 2532 to have her abilities assessed. Lottery will decide her hive level, her profession, her whole future life.

Amber fears that her lack of any obvious talent will mean she’s sent down into the depths of the hive, but her friend, Forge, is addicted to taking risks. When Forge chooses exactly the wrong moment to put himself in danger, Amber must stop worrying about the future, and concentrate on surviving the present. 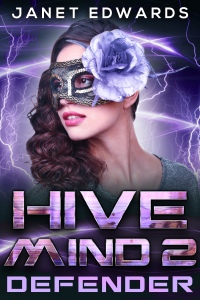 Eighteen-year-old Amber is the youngest of the five telepaths who protect the hundred million citizens of one of the great hive cities of twenty-sixth century Earth. Her job is hunting down criminals before they commit their crimes, but this time her team arrive too late. Someone is already dead. Someone that Amber knows.

Amber is determined to catch the murderer, but she doesn’t realize who she’s up against, or the true danger of opening her mind to the thoughts of others.

2 Responses to Coming Next in the Hive Mind series